In today’s connected, global world, companies that plan to extend beyond the borders of their founding nation are urged to think about localization. Many companies need to translate content to connect with citizens even in their own countries.

Since language is the strongest connection point in an expanding digital world, it’s not only important to target a message to the right people, but also to craft it in the appropriate tone. Often it takes thousands of words to build a brand, one that can crumble with just a single incorrect phrase. It’s never been more important to localize content, and do it correctly for your audience.

Within the localization and translation communities, machine translation (MT) has been a hot topic since its inception in the 1940s. Ever since, computing technology and processing power has only increased its importance now that systems can translate text near instantaneously. But sometimes overlooked in the source-to-output translation equation is the human translator, without whom much of the raw MT output wouldn’t be usable.

That’s where Machine Translation with Post Editing (MTPE) comes into play - a workflow where the raw MT output is edited by a human translator prior to final delivery. In theory, MTPE is the ideal solution to a number of issues with traditional translation and machine translation: speed, cost and accuracy. Traditional translation (humans translating source text into another language), while the most accurate, is typically a slower and costlier workflow. Machine translation is much faster but falls prey to quality issues. MTPE solves those problems by taking the speed and cost efficiency of MT and combining it with the accuracy of human translation.

As translation technology has continued to advance with new outputs like neural and adaptive machine translation, the relative effectiveness of MTPE has decreased. Anthony Teixeira, a freelance translator for over 12 years, is cautious of MTPE.

“It is tempting to think that because MT engines output a draft, translators save time when typing the translation,” Teixeira says. “The truth is that, often rather than not, the output will require so much rework that it would be faster to type the translation out from the start.”

Even in the cases where the MT output is acceptable with only minor revisions required, he continues, any potential time saved is often lost because the translator is required to compare the source text to the output, understand context, find what’s wrong, and write out the correct translation. MT models are then only trained every so often, so translators are also seeing and correcting the same MT output mistakes over and over again. 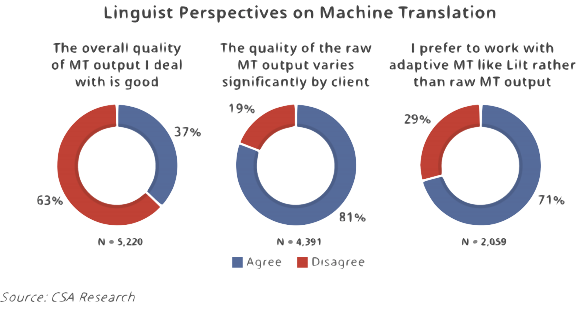 Teixeira isn’t the only linguist out there that holds this view of MTPE. According to their independent research study, The State of the Linguist Supply Chain, CSA Research found that only 37% of linguists think the MT output that they work with is good. Over 80% also see such varying quality of output that it’s likely hard to find consistency in projects. Since the raw output is still machine translated, it often sounds more literal than a native or fluent speaker’s translation based on context and emotion.

So what is the future of machine translation? CSA Research’s study shows that 71% of linguists prefer an adaptive machine translation solution, one that can learn from and train as a result of direct feedback given by the translator. That human-in-the-loop workflow results in a constantly updated translation model that’s more efficient, faster, and more cost-effective than MTPE or other translation methods.

Here's Why Neural Machine Translation is a Huge Leap Forward

Neural Machine Translation is everywhere (and not just on this blog). Translators want to know how it will affect their livelihood, and internal localization managers want to know how they can make it work for their translation strategy. Whether you're looking to assess the business applications of neural machine translation, or peek under the hood to see how all the gears fit together, these NMT videos can help you wrap your head around the rising tide that is neural machine translation.